By the time you’re reading this, the votes have begun to come in and the fate of America is in limbo between good vs. evil (just our opinion, maaan.) Now one thing is for sure, we aren’t thrilled with this old head Biden, but here at Torment we stand for science, climate change prevention, and LGBTQ+ rights. A woman is to make her own choice on her body, and our public lands are to be protected and available to–you know–the fucking public. Anyway, tensions are high, businesses are boarded and by this time next week we hope we aren’t surrounded by civil unrest. If you’re at all worried and want to take your mind off it, we have the perfect amount of now seemingly less important snowboard news below. Enjoy.

“I’m usually a noseslide pretzel hater, but that one was good.” – Louif on Ben Egan’s Panic Order clip. We recommend watching/rewatching the whole thing. The ender is one that makes you feel like you are watching an amazing skate video.

This week we celebrated the season of the Dustbox with I wanted most, a breath of fresh air in a murky snowboard video scene. This winter has proven that the youth—Panic Order, Escape video, Spotheads, etc—are not to be fucked with. Arguably one of the more exciting aspects of this video season. It feels good to know the kids are out there, doing it themselves, and impressing the hell out of everyone.

We started a new series: Top 5 most influential parts where we ask friends, acquaintances, and foes alike to tell us where their inspiration came from. Check Blake’s from this week and keep a lookout on Mondays (sparodically) from here on out.

Coming up we have the Escape 3 video out of Switzerland dropping Sunday. On Tuesday, we are excited to premiere Forest Bailey’s Quiet on our website at 5pm PST. Be there or be loud.

And here is Baden again, bigger and better: 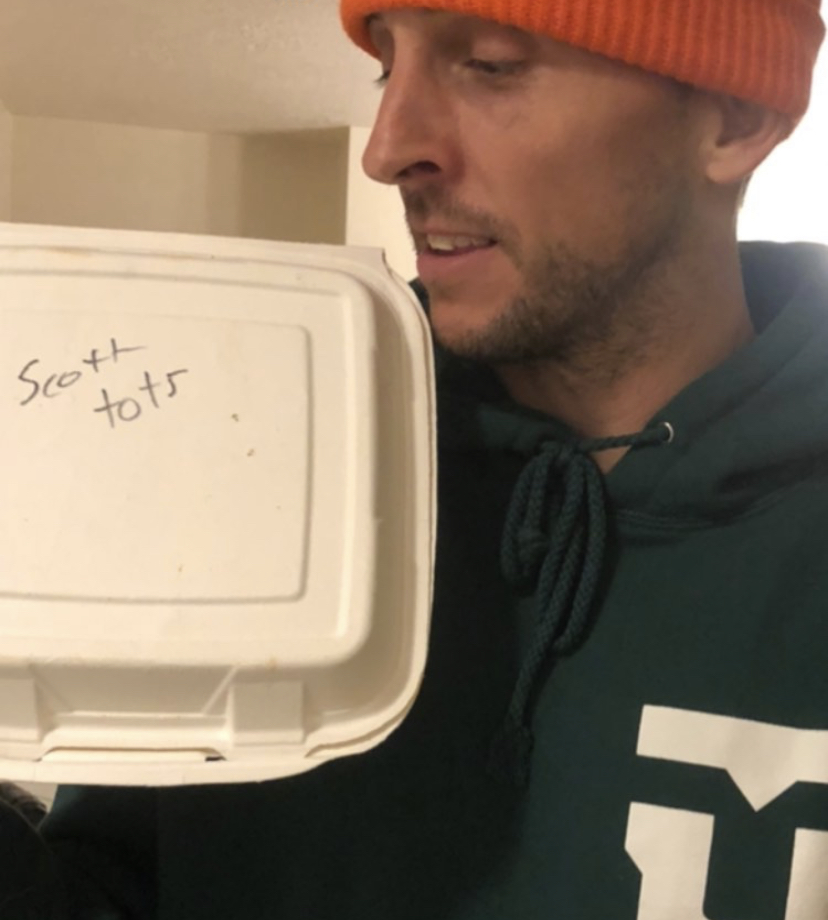 Top 5 Most Influential Parts of All-Time With… Blake Paul

There’s no better insight into ones own snowboard filming ideologies than hearing what their influences are. Blake’s picks include historical and modern day examples of different shades of Blake’s own boarding. His Top 5 proves we are products of our own influences.

I wanted to do this list without diving too deep into what incapsulates the “best” video part, but more based off what came to mind the quickest and what influenced me growing up. Lame was my first video, I got the VHS in the metal case for Christmas from my brother. He got The Shakedown from my Mom. We watched them endlessly that winter, and I continued on the Robot Food craze when Afterlame came out the following season. The rest is history, I was so hooked on the vibe. When I think about this point in my life, I remember being in awe of David Benedek’s riding, kits, deeper thought process, and unique tricks. He had a solid perfected style that was so smooth and effortless, even when he was riding big shit. One of those guys that looks like he’s meant to be on a snowboard.

I picked this one because it hits home regarding the 2020 winter season spent mostly at Brighton UT. I’ve always respected how fluid Dave rode and how he created his own lane in backcountry snowboarding. Most of this part was shot at Brighton and we were on the hunt to figure out where everything was filmed. The first half of the season seemed to have endless pow day after pow day. This was my first winter really spending time riding and getting to know the zones there. I was living with Griffin Siebert and we were checking off all the old TB videos. I think it was Tonino who told us to watch Dave’s part in TB4. We studied those movies, putting them on every morning to get hyped to ride.

I get to cop out on choosing a part from this one because it’s not a part video, but I can’t leave it out. The Jackson location section, Tyler Lepore footage, and O.G. Travis Rice gnarly shit really influenced me as a young kid living in Jackson. The intro with the paper boy was filmed in the neighborhood next to the one I grew up in, and a bunch of local snowboarders/older friends I knew were a part of the movie. It was my introduction to the scene at the time. I’ll still go back for a re-watch today, but you need the dvd because it doesn’t exist online.

I’ve always looked up to Keegan and been fan of his snowboarding. I think this part just came out at a pivotal time for me. I was still in high school, but was riding more than ever and burying myself in everything snowboarding had to offer. It was right before the decline of full-length movies and a year prior to Instagram. I still remember the anticipation for videos and rewatching a certain part over and over. I was so hyped on the song and the teaser for this video. Also looking back, the ollie and front 180 over the the rail to bank then duck clips are still so fresh.

I’m biased, but it can’t go without mention of Sam’s opener in the Vans video. Being close to the situation I just saw how hard Sam worked for this one. He puts his whole life and heart into snowboarding and filming. Lots of injury, heartbreak, hard work, all leading to major success. Sam’s become the people’s champ—everyone knows he does it for all the right reasons. He’s the modern day A.T.V. and continues to impress and inspire me daily on and off the board. This felt like his first big part even though he’s been killing it forever. It’s just awesome to watch it all come together. 🙂

By now, I imagine you know we’ve been blaring “Reality Breakdown” from our loud speakers here at Torment HQ since it dropped yesterday morning. A refreshing start to our week leading into the unknown abyss that is Election Day. Jake has exhibited a unique look in snowboarding over this past decade of video output. This clip is a perfect example of his exemplary talent to create his own aesthetic in our commonly repeated video landscape. Congrats boys, let’s go snowboarding.

Back to the Block happened this past weekend. An experiment to see whether you can get a group together safely with COVID going full blast across the U.S. It was however really sick to watch the premieres with all our friends–been a while. We want to extend our gratitude for the organizers of the event for allowing us to have a booth there. A few lucky readers got first dibs on our new line of merchandise. The rest of you have to wait till November to cop.

In other industry news, Blair Habenicht, is now riding for SIMS, adding to the already stacked team.

The Torment weather channel is reporting accumulating snow amounts over the last week in such places as Calgary, Denver, SLC, Minnesota and parts of Quebec. We’re getting close to lifts running.

Panic Order’s Where do we go

Panic Order’s Where do we go

Minnesota snowboarding comes with a two guarantees—consistent snow years and a yielding crop of young snowboarders who will blow your socks off year after year. This video is a great example of the latter. A dope video right down to the spots, music, and crew dynamic. So stoked to see what’s next for these guys…

A video depicting an alternative reality set in the visuals of Jed Anderson’s travels last winter. Filmed on location in Toronto, Newfoundland and Minnesota.

After forgetting a couple weeks in a row, we forgot yesterday was Tuesday. Seriously losing it over here.

New sponsor news: Louif is on Salomon Boots. He’s now on all things Salomon (Boots, Bindings and Boards.) We went into the Salomon Portland offices this week and saw some Boot prototypes. Shit’s looking dope. Good things to come.

Toonies came out this week proving once again that Quebec is on top.

We’re going to be at the Back to the Block event selling our 2020-21 merchandise. Stop by and say hi and give us your money, then watch a bunch of dope movies like Videograss, Dustbox, Tangle, and Channel Zero. Keep safe by wearing your mask and keep yourself at least 6 ft away from all the people asking what you’re filming for this year.

We’re back after a two week hiatus of forgetting what day it is. That bumper sticker we made last year is really ringing true right about now.

Vans came out with Darrell Mathes raw files from Landline this week, which had been previously unreleased. Really cool to see unseen footage of the godfather. And how about that jam over the dumpster.

On another note, if you like using our public lands, or just enjoy the idea that we as a people have rights to that land, and you haven’t watched Patagonia’s latest film, Public Trust, we encourage you to do that right now.

Last week Griffin Siebert released Backyard Boogie Too, an ode to accessibility and friendship through the very unique perspective of Grif’s own lenses (camera and glasses). A refreshing take on cruising with your friends on natural terrain.

Toonies, a movie based around Seb Picard and directed by Antony Drolet, is being released October 18th here on Tormentmag.com. Tomorrow the 14th, Salomon Snowboards is hosting a live feed on Instagram of the movie as a little early release hype. TOON IN!

EL Sueño, a video based around Erik Leon and directed by Kyle Schafer, gets the award for most nostalgic intro since Suzy G. Not to mention the most unique narration we’ve ever seen. Movie’s got some serious make-you-wanna-ride-powder vibes with Tucker Andrews (our long lost icon), Erik, and Mary Rand deep in Japan. Moving on, let’s focus on Mike fucking Liddle for a second. This guy never stops amazing us. People gotta bring this guy on more trips this year. All in all, well done on all fronts, Erik. Your style is one of a kind. And in the words of your dad “surround yourself with people you love, doing the thing you love the most.”

It’s snowing at Brighton Resort. We’re so close to being able to ride chairlifts again.

“Screening The Cube” an interview with Cooper

@mikeliddle this is insane 👿👿👿 @onlooker.

🤬 wtf @keeganhosefros 🤬 clip from “how dar

Stay up to Date with Torment